From IRON Test Suite
Jump to navigation Jump to search

And the window header, three buttons are available for the test create:

If a task has already generated result in case of deletion, a message box must propose to delete all results generated by this task.

Three are for the task usage

The tree last buttons are dedicated for the filtering

Edition of an existing task or creation of a new task will display the following dialog: 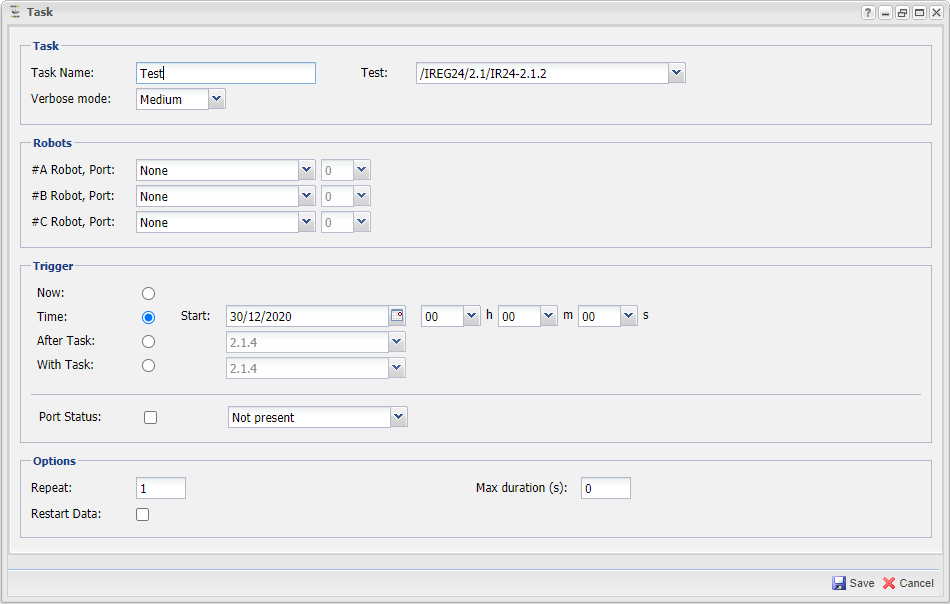 The name of the task, which is unique and the button “Save As” can be used to duplicate a complete task and save it under a new name. If the task name already exists a dialog will ask for a no existing task name.

Test combo is used to select the test payed during task execution. The verbose flag allows running a test in verbose mode. In such case, all executed lines of the test will generate in the result tab one line of result with all intermediate and temporary values and more generally all information needed to debug the test scenario. In quiet mode (verbose not checked) the scheduler will only generates two lines in the result pane, the START line and the EXIT (cond) FAIL or PASS line (with eventually two lines more for each test ran with the RUN action).

Trigger is the way to define when the task will be run by the task scheduler service. Five mutually exclusive options are available:

And an additional condition that can be combined with other triggers:

If several tasks should run simultaneously on the same port of the same robot the second task must fail with a specific error and message in result tab. (ex:”Robot resource conflict between Task1 and Task2”). This verification must be done in real time when a task has to start. It means each time a task has to be started we must loop on all task already running to check if one of them is not using the same robot port. This check must not be done a posteriori because the duration of a task is not known at the beginning.

A Task pre-processing should check that all variables defined in the Test really exist in the selected Data Collection. If one of them does not exist the task will not run and fail with a syntax error in the Result tab.